The South Sebastian Water Users Association, Inc. (the "Association") was incorporated on July 5, 1967 as an Arkansas nonprofit corporation.  Its purpose was to apply for funds from the United States Department of Agriculture Farmers Home Administration (now USDA Rural Development), in order to construct a water storage and transmission system to provide treated water to residents of Sebastian County living south of Fort Smith, excluding Greenwood and Fort Chaffee.  The Association commenced operations in 1968 with 450 users.

Expansion in the early years was steady.  In 1978 a 12" water line to Jenny Lind was installed.  By 1984 lines covered all of south Sebastian County and there were 900 users.  In addition, the Association was supplying water to the cities of Mansfield, Huntington, Hartford, and Midland.  All financing for expansion was provided by the Farmers Home Administration.

On March 1, 1992, the Association began using water from its new lake.  Because of the now adequate supply, hundreds of customers were added from 1992 through 2001, capital improvements were made annually for new water lines, new pump stations, and improvements to the water treatment plant.  The total amount invested during this period was $7,878,656.  Included in this amount was a $500,000 grant from the Arkansas Soil and Water Conservation Commission (now the Arkansas Natural Resources Commission ("ANRC")), and a $4.9 million loan from ANRC for lines to serve an additional 700 customers.

In 1993, interest rates were at an all-time low and it was decided to refinance all of the Association's outstanding debt.  Previously debt had been issued through Sebastian County.  At this time it was decided to take advantage of the Public Facilities Board Act (Act 142 of 1975) so that the Association could issue its own tax-exempt debt.  The Association's Board of Directors approved the conversion to a public facilities board on April 12, 1993, and the South Sebastian County Water Users Association Public Facilities Board was created by Sebastian County Ordinance No. 93-5, which was enacted by the Quorum Court on April 20, 1993.

Residents of Scott County noted the overwhelming success of the new water supply for South Sebastian County.  A citizens group headed by eight Scott County residents filed a petition on May 8, 1992 with the ANRC to form the Scott County Regional Water District ("SCRWD").  The purpose of the District was to furnish treated water to all of Scott County except for the area around Waldron and the area in the north part of Scott County around Mansfield.  On June 22, 1992, a hearing was held before representatives of ANRC and the SCRWD was formed shortly afterward.  The file at the ANRC offices indicates that the SCRWD was attempting to build a lake to serve Scott County.  Specific sites were discussed by the engineers, Jim Alford and Bill Malone.

On March 6, 2003, because of very low prevailing interest rates, the Public Facilities Board refunded all of the previously outstanding debt issued by the County.  The refunding generated immediate savings in excess of $500,000.

At this time two major developments occurred.  First, the City of Fort Smith wanted to expand its water service south and serve population that was being served by the Association.  No agreement could be reached and litigation commenced.

Second, because SCRWD had not been able to generate funds for a water project in Scott County, members of SCRWD, residents of Scott County, and officials at ANRC and USDA Rural Development requested that the Association begin serving Scott County.

The SCRWD entered into an agreement with the Association in 2003 in which it agreed to sign up users for each of five phases of water storage facilities and transmission lines to be constructed in Scott County.  From 2004 until 2008, USDA provided $7,722,743 of loans to the Association and $4,122,037 in grants for transmission lines, pump stations and water storage in Scott County.  In 2006, 350 Scott County residents received service, followed by 75 in 2008 (Bates Extension) and 450 in 2010.

On January 1, 2006, the South Sebastian County Water Users Public Facilities Board changed its name to the James Fork Regional Water District to reflect that it was serving more than just southern Sebastian County, and was in fact a regional water utility.  However it remains a public facilities board governed by Arkansas Code Annotated 14-137-101 et seq.

2010 was also a busy year.  James Fork received a $2,404,000 loan from USDA Rural Development to enlarge its water plant in order to adequately serve the additional customers.  In addition, to further enhance supply, it spent $2,100,225 to install parallel 16" and 12" water lines to Mansfield north.  Both projects have been completed.

In a world in which potable water for human consumption is an ever increasing concern, the Board of Directors and Management of James Fork Regional Water District have worked diligently for the past forty-five (45) years to make certain South Sebastian and Scott Counties have the most modern and up to date water system, which will enhance the health and economic well-being for its users for years to come. 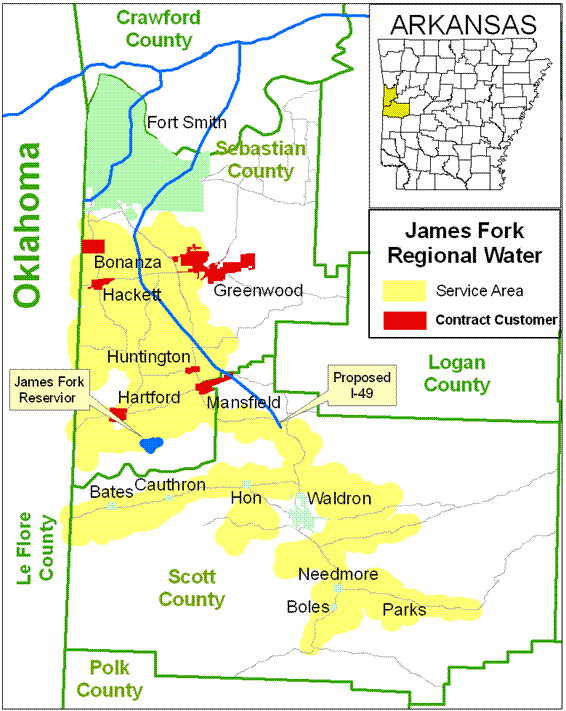 At this time James Fork is asking customers to please conserve water. Thank you!

At this time James Fork is asking customers to please conserve water. Thank you!